I just completed GOBA, the Great Ohio Bike Adventure, so it’s time for a ride report.  I took my action cam and the first time I tried to use it I dropped it.  It survived with only minor damage, but I proved to be so difficult to use that I never bothered again.  In fact the only way I could take pictures was with my cell phone, and I only took a few so there won’t be much illustration in this report. 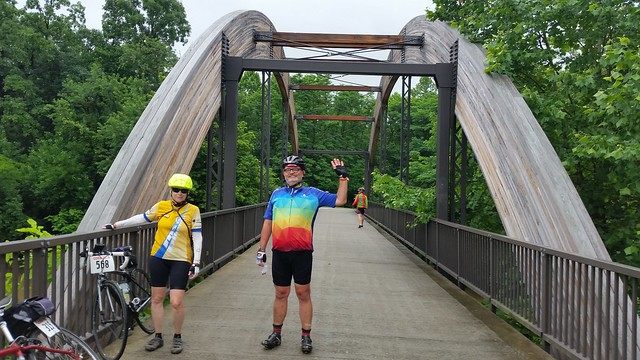 GOBA is a week long supported tour like RAGBRAI in Ohio.  It had about 1500 people this year, which is a thousand less then the times I’ve done it in the past.  You spend your overnights camping at schools or fairgrounds and every day there is a ride, but on two days you remain in the same location overnight so technically you only have to ride 5 days.  Mileage is around 55 miles per day.  GOBA is probably the easiest week long ride, at least it’s the easiest one I’ve done.  It’s generally very well organized and supported.

Friday I drove to Dublin, Ohio I spent the night at my friend Jason’s house.  Jason was doing GOBA and considering it started only 30 miles from his house he saw no reason to drive there and camp to be ready for the ride in the morning.  We arrived Saturday morning in the Delaware fairgrounds to find most riders gone, but many still preparing and arriving as we were.  Picking up my packet took about 30 seconds, I gave the guy my name and he handed me my packet.  We threw our bags on the truck and in ten minutes we were on the road. 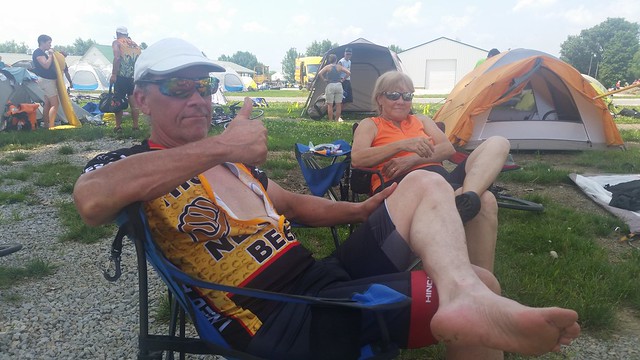 1200+ riders on the road ahead of us meant that we would be doing alot of passing.  GOBA attracts all kinds of cyclists, but a majority of them are touring style and riding slow.  Jason and I breezed by riders all morning,  still it was obvious this was a much smaller ride then the last one I attended in 2010.  Often times with 2500 riders we would find the roads jammed with cyclists.

Before long it had gone from hot to super hot.  I went to Ohio to escape the Southern Illinois heat and humidity, but it followed me.  The last twenty miles of the ride were very flat but featured a tough headwind and no cover.  Weary cyclists could be found under every decent patch of shade trying to cool off. 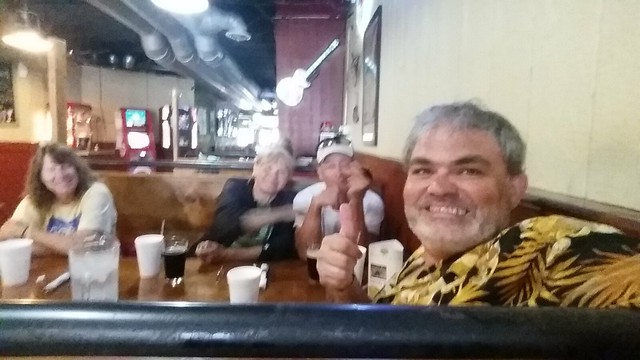 Every ride on GOBA features a breakfast stop, lunch stop, and PM stop where you find water, food for sale, and port-a-johns.  I thought it was a bit curious when I rolled past the PM stop only to find it deserted.  I didn’t plan on stopping as I had a full bottle of water and around ten miles to go.  A local restaurant, “Phat Daddies” pizza was handing out ice water from the trunk of a car up the road and had a huge crowd of cyclists, they saved alot of people.

I arrived at the London fairgrounds out of water and really hot, but many people were in bad shape and were fuming about the missing last stop.  This seemed to reinforce many people’s belief that GOBA was in decline and in danger of dying out.  Many riders were upset about several issues, but the missing water stop seemed to to confirm to many riders that there was a problem at GOBA.

This was an optional layover day and I started with my friends JC and Cindy.  The beginning of the ride was on a rail trail and was really enjoyable.  This ride offered a few choices, you could just ride the rail trail out and back, ride 50 miles, or 60.  I opted for the longest 60 mile option and finished the ride alone.  The markings on this day were a bit spotty and I ended up missing a turn but used the Garmin Edge touring model to get me back to London.  Thanks Dad. 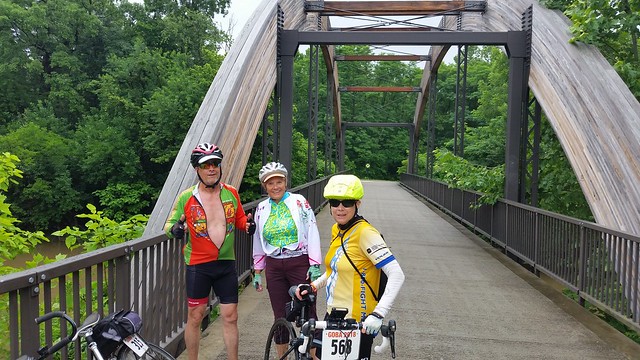 Day three was a 50 mile ride to Circleville and to be completely honest I can’t remember much about this ride.  It was flat and I chased a guy in an orange jersey for ten miles.  I don’t want to sound like a whiner but I have to tell this story that really put a damper on my day.  We finished at Circleville school, grabbed our bags and set up in some grass near a fence.  It was hot and I took off my soaked jersey and hung it on the fence along with my towel.  I put on a t-shirt, set up my tent and got my towel off the fence and began heading for the shower truck.

A woman in an offical GOBA vest standing about 30 feet away yelled at me to get my jersey off the fence.  I was stunned for a moment, because she was really angry, and I wasn’t even sure she was yelling at me.  I looked over at the fence, there were several towels, jerseys, and other items hanging on it.  I gave her a blank stare unable to form a response.

“Yes you, get that jersey off the fence NOW, this is a school, not your personal laundromat,”  she yelled.

“Does my jersey offend you?” I asked.

“Yes, get it off that fence!”  she yelled.  By this time several other campers in the area were looking around stunned.

Later I went to the information area and found the woman answering questions.  I knew it would be best to just let it be but I had been thinking about it for the last couple hours and it had put me in a bad mood.  I asked the woman if she had yelled at me and she said she had, I asked her why.  She repeated that this being a school it was not appropriate to hang a jersey on a fence.  I calmly and respectfully told her she was wrong, and that on every ride I’d ever been on including multiple GOBAs people hung stuff on fences all the time and it had never been a problem.  I went on to tell her that if it was a problem then she should have walked over and told me instead of screaming it from across a road because that’s the appropriate way to talk to adults.

She became more angry and told me I was wrong and that I was camping in an unofficial area and she then threatened to come out and make me move my tent.  I remembered a lesson from Mr. Jim Butler back in High School.  In a conflict, don’t get mad, kill them with kindness.

“The stress of running GOBA has obviously gotten to you mam, I know it must be hard and I respect the hard work that you are doing to keep the ride going.  I’m sure you didn’t mean to disrespect me and ruin my afternoon.  Thank You.”   I said and walked off.  She apologized as I was leaving.

Another 50 mile day with a lot of fog and some interesting roads and hills.  This was a fun ride.  Near the end I was passed by a guy and caught him.  He was Canadian and a strong rider, we were flying through the hills leading to Lancaster and this was some of the most exciting riding of the week. 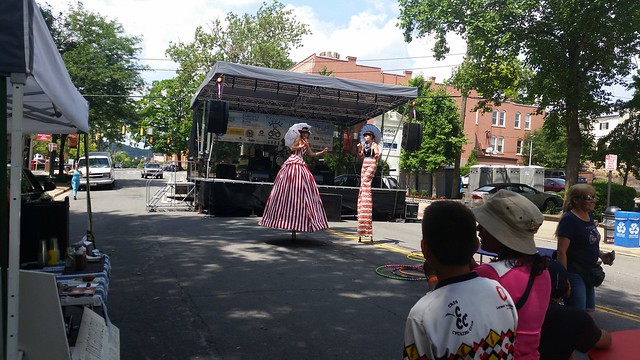 Lancaster pulled out all the stops and had a big street carnival prepared for us.  I was way to early to experience it, but came back later to see the street performers, music, and lots of vendors.  We spent a lot of time in the “Four Reasons Bakery” and ate a very memorable meal at “Ohuid’s Galeic Pub”  It was a very cool town and fun day. 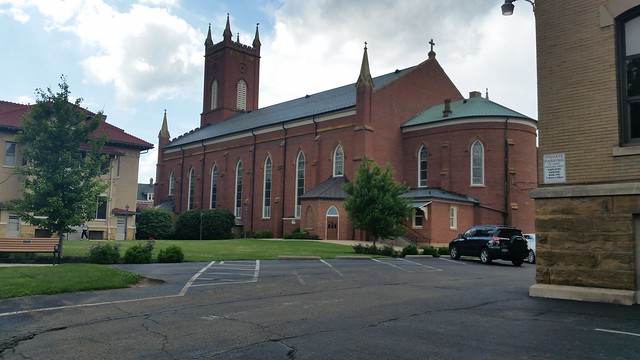 On our second layover day I opted not to ride.  Instead I hiked up to an overlook and took my laundry to town.  Rain set in near the end of this day and wouldn’t let up.  A Goba official told us to camp indoors at the next town because of some possible really strong storms moving through. 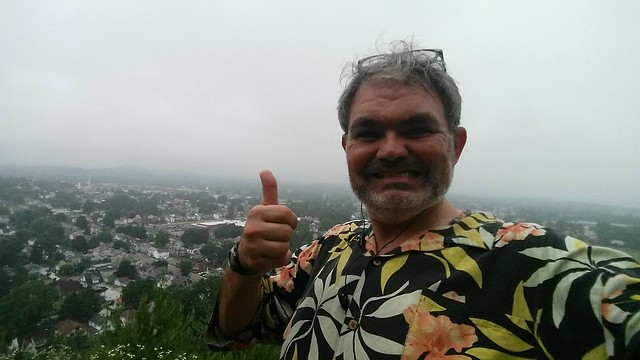 Faced with two more days of near constant rain my friends decided to plan an alternative route back to the start at Delaware.  I was really excited about this as I was looking forward to getting done early, and I also enjoy going off route and doing my own thing sometimes.

Jason agreed to go with us and act as our guide.  He planned a route that took us on several bike trails to get through the very busy city of Columbus.

Rain stopped in the morning and we were able to pack up and leave.  Two tandems and three road bikes took off on an epic adventure.  It was smooth sailing until we got on the bike trails and found large sections of them underwater.  We had no choice but to ride in water, sometimes 2 feet deep.  Jason kept us going in the right direction and kept us on the bike trails.  We rode 20 miles of the Alum Creek Trail and it was really fantastic, except for the underwater parts.  These purpose built bike paths are really fun to ride and took us right through Columbus up to Westerville. 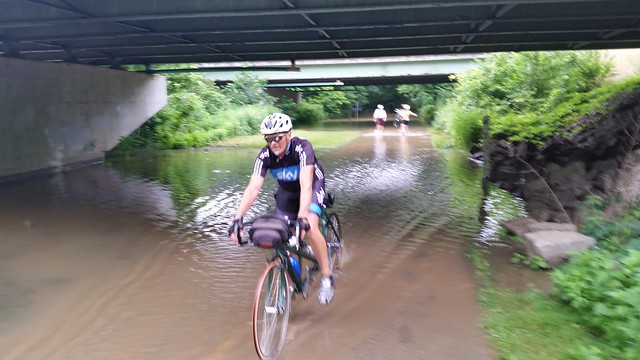 About 40 miles in a heavy rain started and I have to admit I really regretted not having a jacket, in the 69 degree rain.  Still I stayed warm enough and accepted it was all part of the adventure.  Also it’s hard to complain when one of the riders you are with is a 12 year old girl and is not complaining.  Jason’s friend Nick and Ashley his 12 year old grand daughter were the team on the other tandem with us.  They were very strong riders and really fun to ride with.  Nick was a blast and in high spirits all day, just loving every minute of the ride. 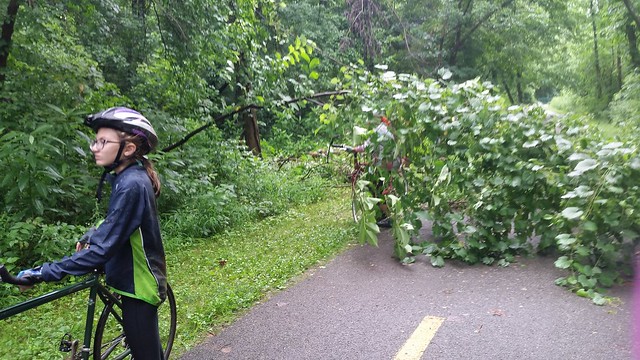 I don’t know if GOBA is in trouble or not, but I have a lot of positive things to say about it.  The ride is so much more fun with 1500 people instead of 2500.  There was way less waiting in line on this GOBA.  I never had to wait more than a few seconds to use the restroom, the shower, buy food, or whatever.  The roads were far less crowded with slow moving riders clogging up the entire lane. 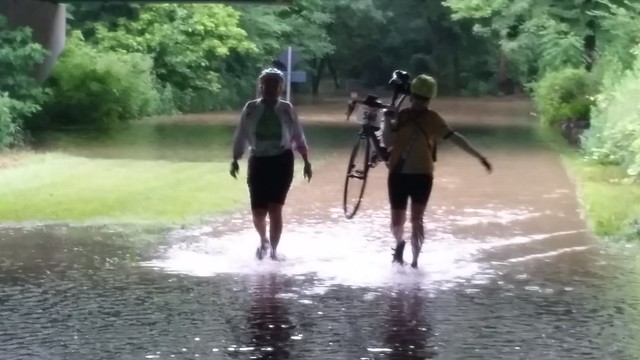 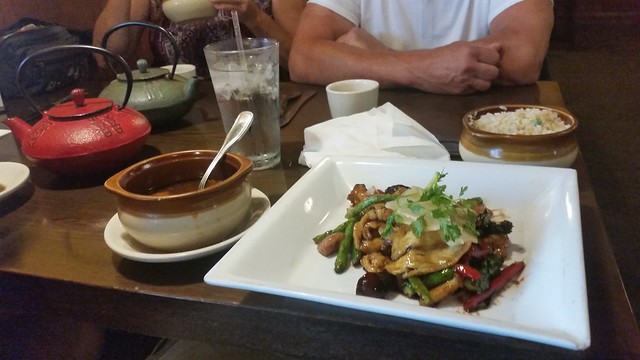 Sure getting yelled at for hanging my jersey left me a bit ticked off, but it wasn’t that big of a deal and gave me a good opportunity to practice conflict management.

I don’t know if I will do GOBA again, as far as stress free bike tours are concerned you couldn’t find an easier one then GOBA, but there lots of states where I haven’t ridden and lots of tours that I haven’t done.  Still if you’re looking for a fun, laid back week of riding for the whole family then GO GOBA.