Tour of the Ozarks Part One

It’s 8:53 PM, nearly dark and I’m careening down an incredibly steep highway following two blinking red lights in the distance.  I chance a short glance at my Garmin and see the speed is registering 42 mph.  I’m going 42 mph and I can barely see where I’m going.  The thought crossed my mind, this is living, but it’s awful damn close to dying.

In the distance a strange pair of lights are approaching, like a car turned on it’s side, one headlight high one low.  The flashing red light in front of me yells, “HEY ARE YOU EVAN!” and I hear the squealing of brakes and immediately hit my brakes as well.

“Dude can I get your picture,” the flashing red light yells.

“Yeah but make it quick I’ve got to make the Cave in Rock Ferry before it closes in 24 hours,” Evan says.  That’s about 250 miles in 24 hours.  I avert my eyes, for I am in the presence of a cycling god.

I’ve survived my 5 day Tour of the Ozarks and returned home with all the self supported touring that I needed and then some.  This winter as I considered another few days of self supported bike touring I wanted to do something a bit more ambitious than the 250 miles I did last year, but I also wanted to keep it to under a week.  I spent a great deal of time looking at the adventure cycling route network and then it hit me.  The Trans America Trail and the new Bicycle Route 66 make a great circle starting at Farmington MO. which is less than three hours drive. 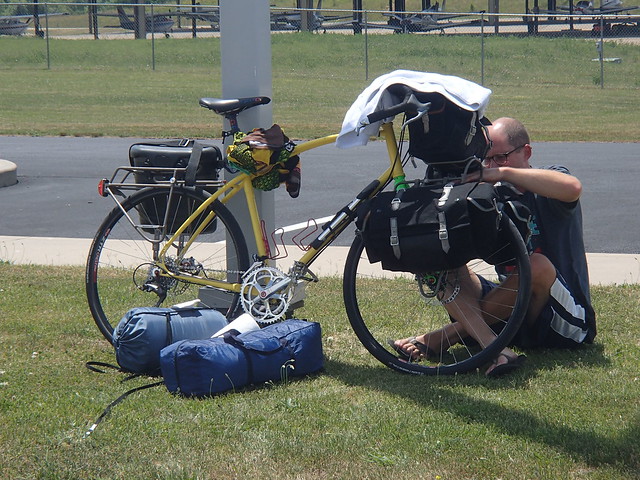 When I started fishing for another rider my friend Ryan took the bait and began preparing his gravel road bike for loaded touring.  It was perhaps predestined because I told him that particular gravel road bike would be great for loaded touring when he bought it.  I built up my Nashbar Touring Bike and got it working sort of and purchased a couple of Adventure Cycling maps.  That’s about all the planning I did for this trip which became evident later. 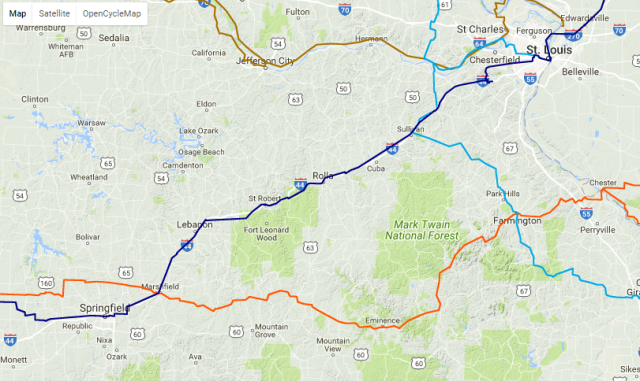 One small bit of planning I did was to find a place to park my car for a few days which turned out to be the Farmington Regional Airport.  Chuck, the airport guy, was super friendly and I found myself face to face with him Wednesday afternoon around 1 PM.  At this point we were about 4 hours off schedule.  The plan was to ride about 60 miles to Powder Mill campground on the Current River.  I thought a laid back first day would be a good way to start the tour. 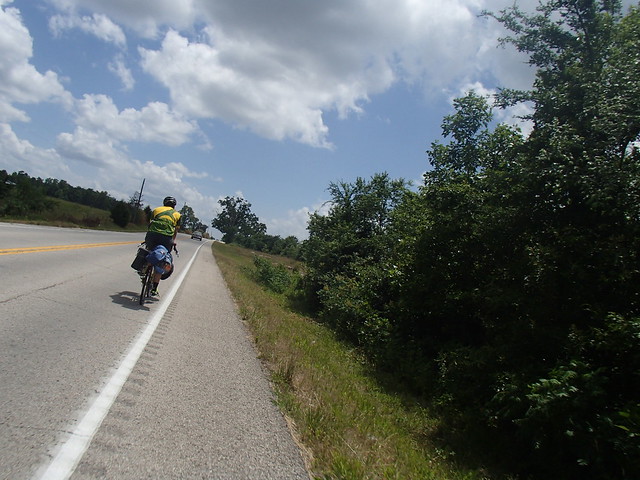 It became apparent on the first hill as I watched him pull away from me that he was more than capable of riding the bike up hills.  On this first day we settled into a familiar routine.  He would distance me on the climbs and I would catch up on the downhills and we repeated this over and over again.  The route was hilly, constant hills, about like the hilliest ride you could come up with in the Shawnee National Forest, except with longer climbs.

Eventually we stopped at a diner in some tiny town and met a rider there who was struggling to get back on the road.  I think he said his name was Ryan and since we already had a Ryan we referred to him as little Ryan.  Little Ryan was riding the TransAM from East to West and was aiming for 77 miles a day.  He had been on the road for about 4 weeks When we first met him he seemed almost in a daze, he was upset with the humidity and said over and over again, “It’s not efficient, its just not efficient.”

Little Ryan asked if he could join us and we agreed so he bought a Monster energy drink and perked up a bit.  He had far less gear than either one of us, just a small pannier and a little bag strapped to the top of his rack.  He explained that he began mailing stuff home as he began climbing the Appalachian mountains.  He wasn’t using using his stove and saw no reason to continue carrying it.  Little Ryan was a strong rider and had no problem riding our pace, he was excited to begin seeing the TransAmerica racers as they made their East bound journey and he was expecting to see the leader Evan Deutsch this evening. 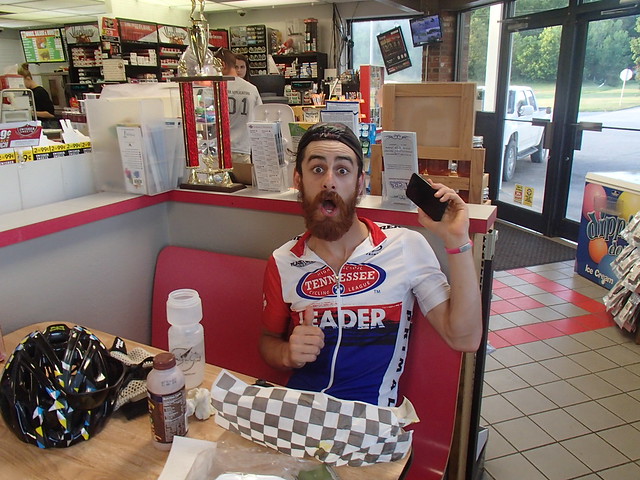 We arrived in the town of Ellington having rode 63 miles and discovered that the campground I had planned was actually 14 more miles down the trail.  Opps.   It was around 7PM and Little Ryan was going to have something to eat than ride in the dark.  I was the only one of us without any kind of light was wasn’t interested in riding in the dark.  Big Ryan wanted to push on through to the campground was certain we could make it by dark and I agreed, though part of me would have been more than happy to shut it down for the night. 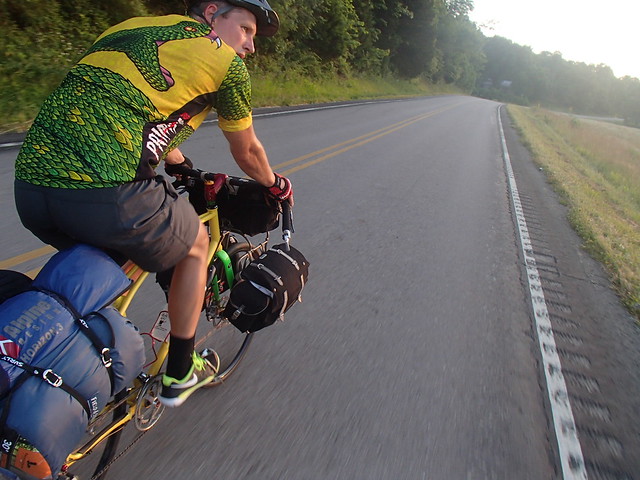 One hour later it was getting dark and we stopped so Ryan could mount his headlight and tail light.  Little Ryan caught up to us and we rode the next few miles as I tested the limits of my night vision.  Eventually we ran into the TransAM race leader Evan which is the story I opened with.

Shortly after meeting Evan we arrived at the Powder Mill Campground.  Little Ryan continued on and we turned off, a quarter mile later we encountered a barricade across the road claiming the Campground closed.  Past the barricade we saw the aftermath of some recent flooding that completely decimated the area.  The road and trees were all washed away, the campground was gone.  There was nothing but a huge flat dirt patch where the campground had been and a locked bathroom.  The bugs began to swarm our light. 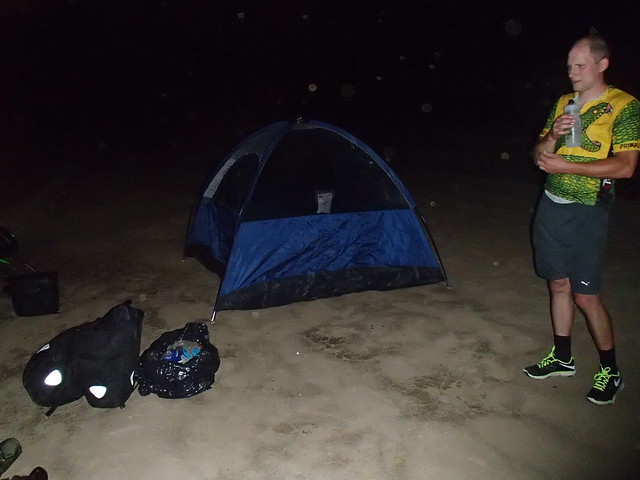 I staggered around, unable to formulate a plan, I couldn’t find two standing trees to hang my hammock.  Ryan offered me a spot in his tent, and we set up camp on the dirt.  “This will be fine if it doesn’t rain,” I said. 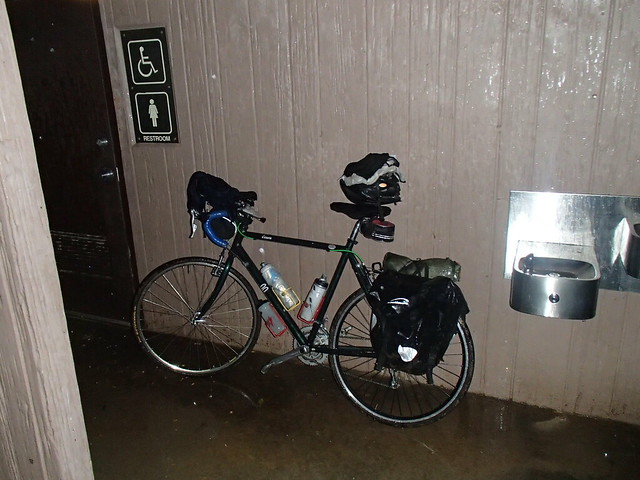 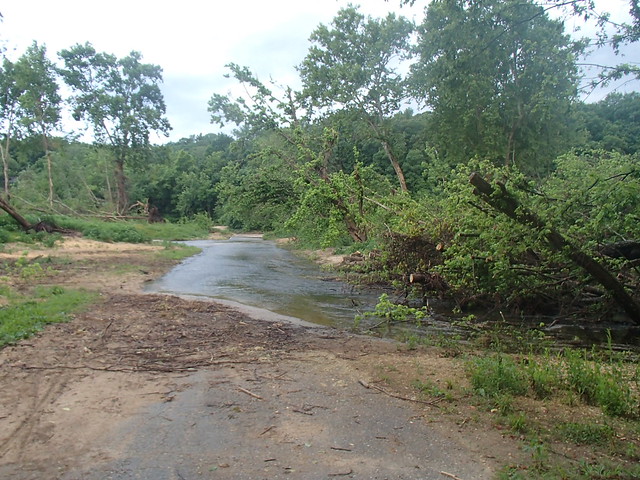 3 Responses to Tour of the Ozarks Part One