Well I did it again, I bought some stupid cheap bike junk online and paid for it.  I needed a new mountain bike brake when the rear Hayes disc failed recently.  While searching for a new disc brake online I came across a deal on Amazon that seemed impossible to beat.  Calipers, levers, rotors, and cables and all associated hardware for 27 bucks.

The levers and calipers came in a slick white color, and from the pictures they looked pretty nice.  I knew they were were cheap knockoffs of Avid BB5s; they have single side pad adjustment and use BB5 pads, but I figured how can they mess up a simple cable disc brake? 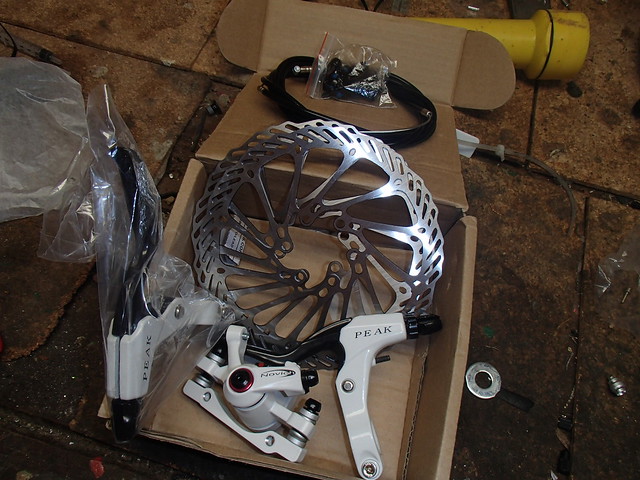 Installing these was pretty nice, they come all set up on brackets and ready to go.  I installed the rear caliper and did a few runs to “break in” the pads.  Soon I was stopping with mild authority.

Sunday we hit The Back Nine for some excellent Shawnee style trail riding, which is to say rough and dirty.  The new rear brake was a bit wimpy at first but after a few downhills it had easy wheel locking power to spare.  I bragged to everyone about my awesome new 27 dollar brakes. 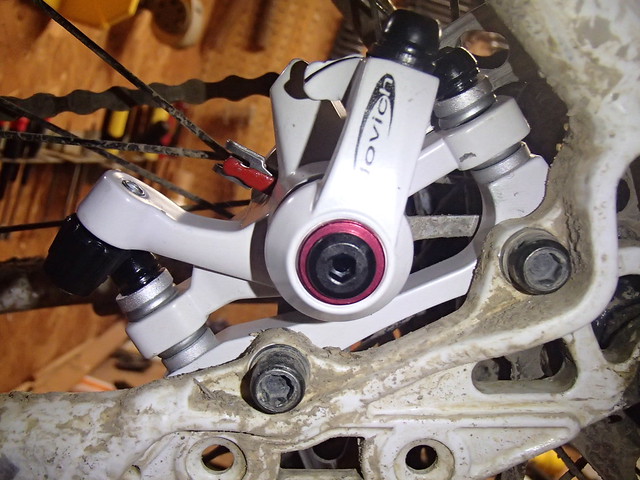 Right before the halfway point of 7 miles I grabbed for some rear brake and felt “POP” in the lever.  My rear brake was gone.  I held everyone up for the next 15 minutes while I tried to figure what happened.  My cable hadn’t slipped, the actual calipers weren’t working.  When the brake arm was halfway through it’s travel the caliper piston would snap from being halfway engaged back to zero.  It was impossible to get any rear brake no matter how I adjusted it.

For the next 8 miles I rode with just the front brake.  This isn’t really a big deal, I’ve done it before, it just means that I had to take it extra easy on the downhills and switchbacks.  Bummer.

Luckily Amazon’s policy means I can return it for free.  I decided to bite the bullet and buy a brand new set of Avid BB7s. I’ve never really used an expensive disc brake, I had some cheap hydraulic Maguras for a long time that worked fine, and a cheap Shimano hydraulic which is currently on the front of my bike.  It Stops the bike, but it’s never felt that great.  I did have a set of very old BB7 that I bought used and gave away awhile back.  When they had good cables they were just as good as any other brake I’ve used.

So again, my friends, there are sweet deals to be had, but you often get what you pay for.

In some better news this weekend’s mountain bike ride was the first ride I’ve been on in a weeks where I felt good.  I had lots of energy and at least until my brake failed I was handling the bike pretty well.  I was also climbing far better than I have been.