It was high time for some new wheels, or at least in my mind it was.  I was interested in wider rims, more spokes, and a more aero profile than my 5 year old Ksyriums offer.  The Ksyriums have been excellent wheels, racking up 12,000 plus miles, which means more when you consider my weight, but I’ve been wanting something different.  I began my search by posting on bikeforums and asking for some recommendations in my price range which was around 300 bucks.

Now asking for advice on a web forum is kind of like walking into comic book convention and yelling out, who would win in a fight between two random comic characters.  You’re going to probably get more information then you could possibly want and very little of it will be useful.  For example I once asked about bikes when I weighed around 275 and a forum user swore that anyone that fat should only be riding trikes designed for special needs individuals.

So I got a bunch of advice, of course the standard, “You can’t get anything decent for less than X amount of dollars,” but someone posted links to parts I could buy and build my own nice set of wheels.  I’ve got some experience building wheels, though it’s usually rebuilding wheels with broken hubs or rims.  I’d never ordered all the parts new and built one from scratch.  I thought that buying parts and building wheels was kind of old fashioned and now everyone buys pre built wheels.  I guess it kind of is, but it looked like you could some really great wheels cheap if you were willing to order parts from overseas and build them yourself. 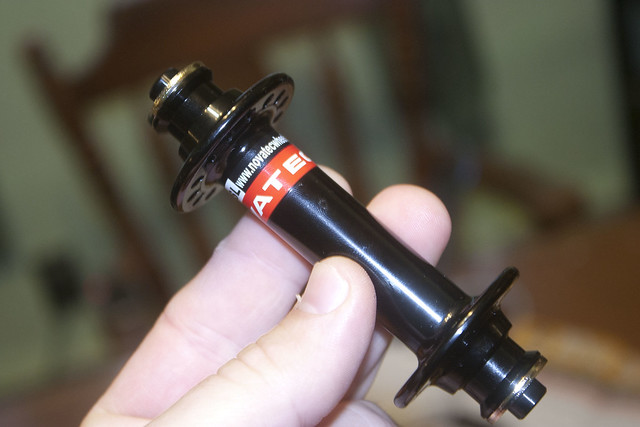 Someone else suggested a DIY wheelkit from BDOP cycling.  I checked them out and decided it was the way to go.  BDOP is a guy in Taiwan who sells several different cycling products by mail.  I could order the kit with everything, and I do mean everything, that I would need cheaper then ordering the parts separately and this way I was sure I’d get the right parts.  Another big selling point for me was the fact I could order the various kits with options, for example 28 front 2 cross spokes and 32 rear 3 cross spokes.  Even more exciting is that particular build would weigh less than my Ksyriums while having way more spokes.

The kit I picked out comes with Kinlin XR31T rims, that are 24mm wide, Novatec hubs that weigh almost nothing, CX-Ray spokes that are very popular, aluminum nipples, light aluminum skewers, a spoke wrench, bladed spoke holder and rim strips.  The Ksyriums will almost fit inside the Kinlin XR31T. 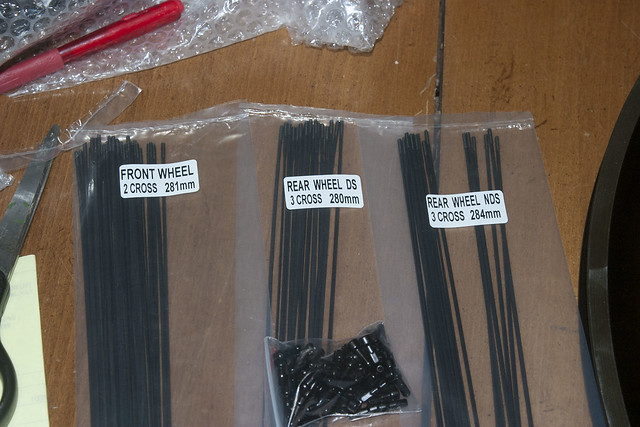 So the kit arrived in I think around 3 weeks, it wouldn’t have taken so long but i ordered them right before the Chinese New Year and BDOP was on vacation.  The box was shipped International Express, which I had to sign for, but being a postal employee I know this is a very secure way to ship.  The items were packed very well.  Everything is in it’s own labeled bag including the spokes.  I was really surprised by the quality of the spoke wrench it is really nice and engaged 3 sides of the spoke nipple. 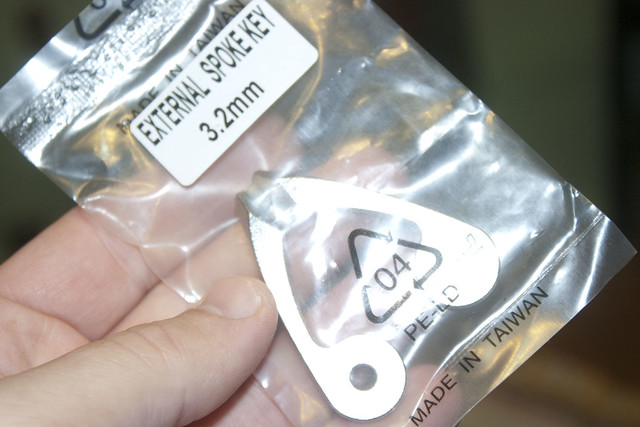 I had a problem building the front wheel because I’d never laced a wheel 2 cross.  It took me two tries to get it right, but once I did it was simple.  The back wheel was easy to build.  I brought the spokes up to tension and used my Dad’s Park tension gauge to get it right.  Truing the wheel was easy, probably easier than any wheel I’ve built. 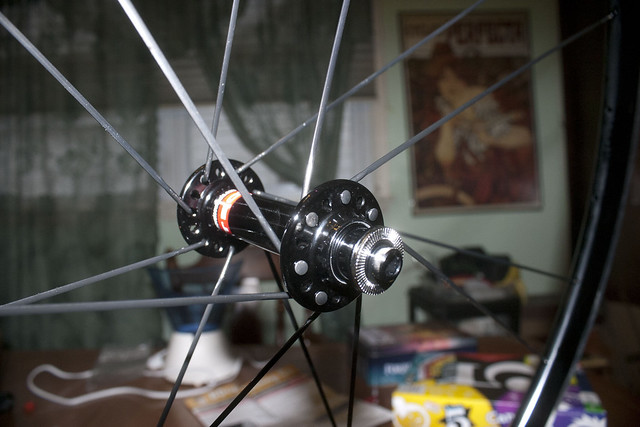 I’ve taken two rides with them now so I can’t say anything about their durability and not much about their performance, but I can say I’m pleased so far.  The only negative thing about the entire set is that the rear rim has a slightly not flush brake track where the rim is connected together.  It’s off enough that you can feel it when braking, though I think it’ll wear down very fast or I Could sand it.  This should have been caught by quality control at Kinlin.

So the wide rim offers a slightly better ride I think. It’s stunning how 24mm Grand Prix tires look on it.  The tire is exactly the same width as the rim, they are nearly flush.  As you might imagine getting the tires on the wide rim took some effort.  The 31 mm tall rims are taller than any I’ve had, and have a nice rounded aero profile.  I rode in some fierce winds yesterday and the wheels felt so stable.  In strong side winds the Ksyriums feel kind of blustery sometime, I think because of their squared off profile, or maybe oversized bladed spokes?  I am loving having a 2 cross front wheel.  I’m not a big fan of radial laced front wheels.  They might be lighter but for a big guy I can feel them squirm when I’m out of the saddle.  These new wheels feel rock solid, more solid then my 32 spoke Open Pros too. 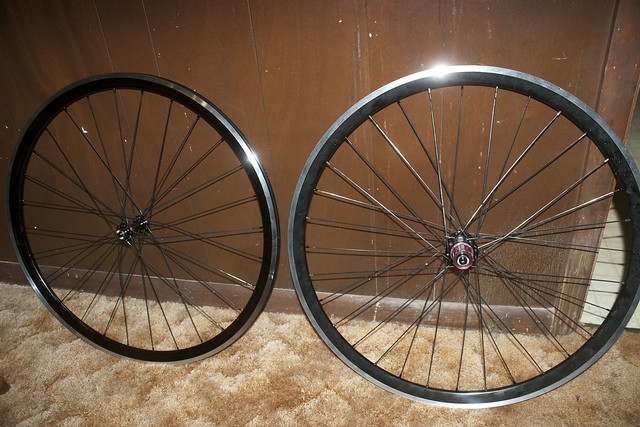 One thing to look out for is the rear hub, it has an aluminum hub carrier, which is very light, but also very soft.  Aluminum hub carriers are easily destroyed by steel cassettes.  I’ve had some that are so gouged I had to break the hub carrier to get cassette off.  This Novatec has a anti bite guard.  One of the splines is a glued in piece of steel.  The steel should stop the cassette from digging in and damaging the rest of the splines.  I wish it had more steel splines though.  The real answer is a more expensive cassette with an aluminum spider instead of individual cogs. 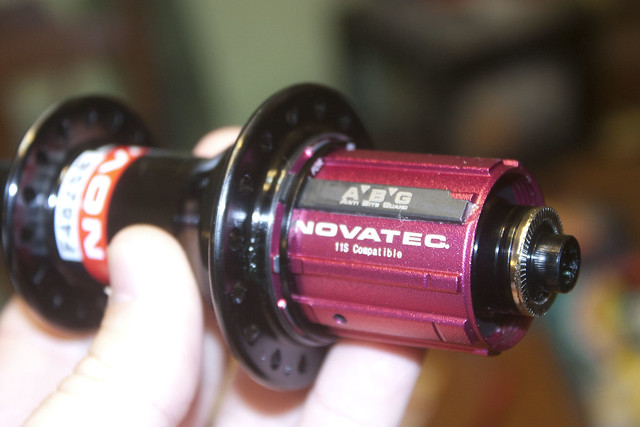 You can buy similar wheels on ebay direct from china for around 200-300 dollars already built, they are cheaper and lighter but also the ones I’ve seen on ebay usuall have cheaper parts and only 20 radial front and 24 2 cross back.  Probably fine for a 135 pound guy but not for a clyde.  With BDOP you get better spokes, better rims, and can choose the configuration you want, if you feel brave enough to build your own wheels. 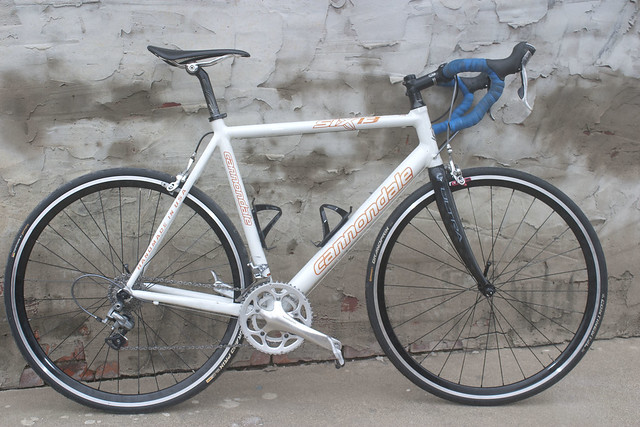