The Beast of the East is Back 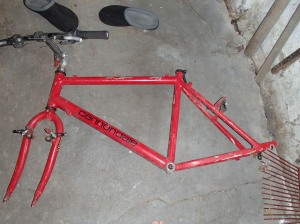 I let it be known awhile back that I was looking for a cheap and hopefully interesting 26 inch frame.  My pal Tom delievered in a big way with a 92 Cannondale M800 Beast of the East.

First off lets talk about the name, “Beast of the East,” that’s an epic name right there and the as far as I can tell there is a story behind it.  Cannondale is based in Pennsylvania, but mountain biking and mountain bike companies are mostly Western US based.  There was always been this generalization that the riding on the East side of the US is different from the West Side.  The theory was that riding on the “east side” is more rocky, rooty, muddy, and just plain harsher, so the good folks at Cannondale built a bike specifically for the East with a very high bottom bracket. 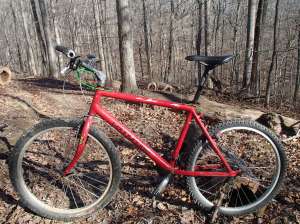 I took the bike out on a maiden voyage shakedown cruise today along with my wife who did some hiking.  I haven’t rode a 26 inch bike in a long time and I was expecting to have problems.  It would turn out to be an excellent ride.  Recent cold temps have frozen the ground creating a mud free and fast surface to ride on.  Ice in the water crossing and on rocks kept me from trying some of the most technical crossings but the 26 inch wheels performed very well.  The last time I had tried riding 26 inch wheels after spending so much time on 29ers I was constantly sticking the front wheel and going over the bars. I never had a lick of trouble on the Beast.

Today’s ride marked the first time in a very long time I’ve ridden a mountain bike without disc brakes.  I had to adjust a bit to the cantilever stoppers, but once I did I was happy with them.  Disc brakes are probably the best innovation in the mountain bike world, and maybe the entire bike world, their reliability and stopping power just can’t be matched.  I quickly noticed the cantilever brakes didn’t have the stopping power of a disc nor did they have consistent modulation.  The cantilevers did reliably stop the bike except when water froze to my wheel, I forgot that would happen.

Setting up my position the Beast was a bit odd, the tall Bottom Bracket requires the saddle to be about an inch higher then I’m used to.  I thought the higher center of gravity might be a problem but it wasn’t.  Another weird geometry quirk the Beast possesses is a very tall headtube.  I never felt like I was going to be catapulted off the front, nor did I have problems keeping the front wheel on the ground while climbing.  Turning was excellent, the stiff fork just seemed to carve corners.  I had no problems in rough technical stuff and just pointed the bike where I wanted to go.  The big cushy 2.55 tire up front may be responsible for that. 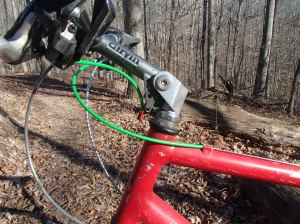 There was a time before suspension forks when an array of flexible suspension stems were widely used.  The Beast has been fitted with a Girvin flex stem.  I’ve never ridden a flex stem and I honestly wasn’t expecting to like my handlebars flexing up and down.  At first my suspicions were born out.  The constantly moving stem was weird an annoying.  About 30 minutes into the ride on the first fast downhill I became impressed with the bit of cush the flex stem offered.  Over the next hour I quit noticing the movement, I think the stem grew on me. 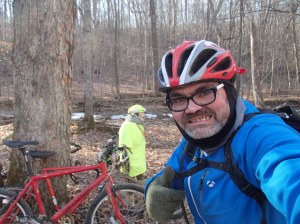 There were a couple of occasions where I think the 29er wheels would offer a big advantage, their ability to roll through rougher terrain with less loss of speed can be the difference between making a tough section or putting a foot down, but the 26 inch wheels were much better than I remembered.  My 26 inch wheelset are Deore hubs and Rhyno Lite rims, they are cheap, tough and heavy.  Going up hill is noticeably easier on set of light wheels. 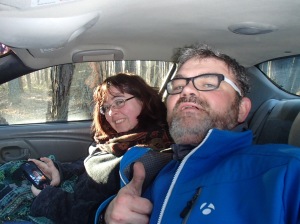 The tall Bottom bracket of the Beast made for the first ride I’ve ever done without a single pedal strike. I never once banged my pedals on a rock or obsticale.  Even better I rolled over several large tree limbs without slamming my big chain ring.  In short I wish I’d had this bike years ago and I’m really glad I have it now.  It won’t replace my 29er but I’m sure it’ll turn some heads at the next group ride.