the cold cable routing ran under the down tube like a road bike, not very common for mountain bikes.

So you’ve been reading my blog for long you’ve probably seen pictures of dirty mountain bikes, keep in mind those are pictures after I’ve sprayed the mud off.  Sometimes my bike comes home so muddy that I can’t even roll it into the basement.  About the same time I started hosing my bikes off after rides I noticed a rapid decline in shifting performance.  Sure, I could stop hosing off my bike and clean it with a bucket of soap and water, or I could do like some of the other guys and stop spraying the mud off and letting it fall off naturally, or I could just bite the bullet and go with an indestructible Single Speed. 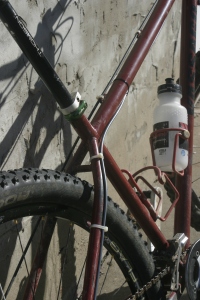 Instead I installed full length cable housing.  My Vassago Bandersnatch runs the cable underneath the frame like a road bike and has a piece of housing at the handlebar and another piece at the derailleur.   In the past I would replace cable and housing about 4 times a year in attempt to keep the bike shifting.  Often times I would try to flush out the cables with oil, only making them worse and making shifting nearly impossible.  I finally realized when I was building up my Dos Niner that I could just ignore the cable stops and run a full length of housing to the derailleur.

On the Dos Niner it has been a revalation.  I built it up last year in Feburary, rode it through some muck in winter, spring and some muck this fall, still shifting as smooth as butter after hosing off the bike after every ride.   I ordered some parts to get my Bandersnatch running recently and found a deal on an entire box of cable housing, the box had been opened so I got if for half price 34 bucks for 30 meters.  Sorry bike shop, that would be around 200 dollars worth of cable when I buy it by the foot from you. 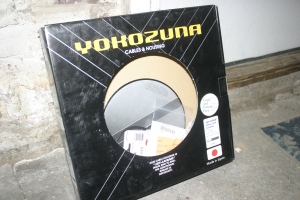 Rode 17 miles yesterday on the Bandersnatch, with Joe and Tom.  First time mountain biking with Tom, and he was on a 26 inch bike, which wasn’t a concern because he came ready to ride and was killing it up most hills, he won the king of the mountain category for sure.  I keep forgetting to bring my camera on rides recently, you’ll just have to take my word for it, conditions were awesome, the forest was amazing.  Fall rules!