This weekend marked the 11th annual Tour de Corn in East Praire MO.  This ride was listed in Bicycling Magazines “Fun Centuries” this year so I knew there would be a big turnout.  The ride typically draws 600 or more people, they were expecting 800 this year, they got nearly 1200 entries. 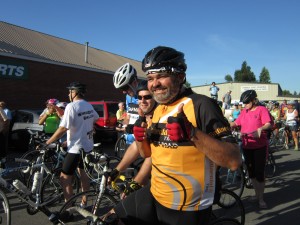 At the finish line, not a standard pre ride pose, got a double thumbs up going here.

I had made a decision this year, I was going to go to the front of the ride right from the beginning and see how long I could stay in the front group.  Tour de Corn is like flat, I mean like flat like the only time you go uphill is the two times you go over the interstate.  It may be the only ride where I could conceivably compete.  The decision I hadn’t made was either the 100 mile or 65 mile route.  Mom and Dad came with me on the ride and were doing the 65 mile route, but they had no problem waiting on me to complete the 100 mile route.  I met several folks that I knew around the start and seemingly everyone was having a the same dilemma I was having.  I did the 100 mile route last year and it was fun, but I was thinking if I was going to go out racing I should go with the 65. 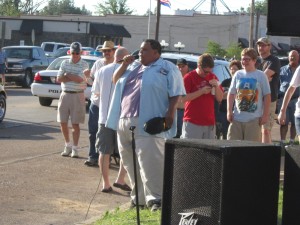 Neal E. Boyd about to melt some faces with AMERICA the BEAUTIFUL!

We were treated with a potent edition of America the Beautiful by Neal E. Boyd, an opera singer from nearby Sikeston MO.   Neal won America’s Got Talent in 2008 and after hearing him sing it was obvious why.  The man has pipes!  This is just one of the many reason’s why the Tour de Corn has continued to grow while other rides stagnate and die.  They consider their ride important enough to always get someone to sing the National Anthem, or in this year’s case America the Beautiful. 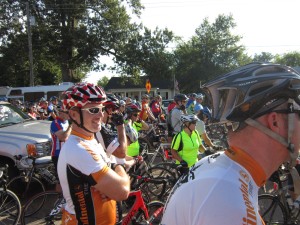 JW, don’t even try to hold his wheel, he’s a machine!

I had met up with a few pals from the Bike Surgeon team, SMBA, and a young guy that had come to ride with me a few times in the past.  This young man in question had updated from a Trek 1000, to a full-blown carbon time trial machine.  As soon as the ride fanned out I began moving up through the crowd.  A couple of miles into the ride we had to make a decision on the 100 or 65 and I was still the leader at this point.  Without hesitation I made the left turn to place us on course for 65 miles.  Our paceline started cruising at around 22 mph and we began reeling in riders in front of us.  Everything was going great then I heard “SNAP.” 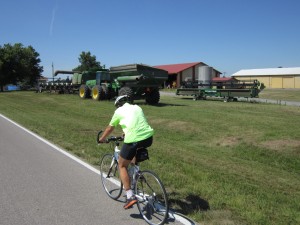 Mom was pushing the pace as usual!

A spoke broke.  This felt kind of like a rerun, last year at the Tour de Hope I was having a great time riding with a fast group of racers and hanging on when a spoke broke, at least then I had 50 miles of riding in.  This year I had 3.  I said screw it, reached back to loosen my brake and continued to ride.  The guy behind me was like, “Dude your wheel’s about to fly apart.”  I was like, “By God let it fly apart! KHAAAAN.”  (Ed. Note: That is some kind of Star Trek reference I think). 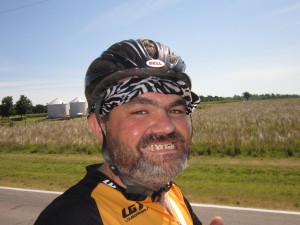 The flash fired to fill in the deep shadows on my face, great little camera!

Soon it was my turn to pull again.  I was laying as low as I could on my bars, we had turned into a tailwind, and the speeds were around 25 mph.  I knew the wheel was holding me back but I continued to push.  I was up around 26 for a while but couldn’t hold it, I tried to pull several minutes, but it was getting tough.  My heart rate was around 172, which would be about right for climbing a monster hill, not pulling a paceline in a tailwind.  I pulled off and could barely hold contact with the group.  Scotty was like “Captain, I’m giving you all she’s got!,” and I was like, “Damn it Scotty it’s not enough!”  (Ed. Note: definitely a Star Trek reference.)

Check it out, its one of two hills on the 65 mile route! I of course had to stand up and hammer over it!

We hit the first rest stop and I pulled off, the group continued on.  My dream of being in the front of the ride was over.  I picked up my bike and tried to spin the back wheel.  It wouldn’t budge.  I have no idea how I was able to make the bike go 25 mph, it must have been the high performance ceramic bearings and bladed aero spokes.  (Ed. Note:  I think he’s being sarcastic here?)

I undid my back brake and waited about ten minutes for my Mom and Dad to come near the front of the main 65 mile group.  They saw me waving at the first stop but kept going, thinking it must have all been part of my master strategy to hang out at the first rest stop for 15 minutes.  I jumped on my bike and followed them.  With the brake cable completely loose I had no back brake, but also a nearly free spinning back wheel.  It was still only slightly hitting the frame. 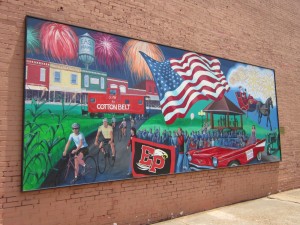 This mural shows just how important the Tour de Corn is to East Praire.

At the second rest stop I borrowed a wrench and adjusted some spokes on my wheel to keep it from smacking the frame.  I finished the ride with Mom and Dad, and had a very good time and felt really lucky I was able to finish the ride.  From my point of view the Tour de Corn had another excellent year and was ran excellently.  The rest stops maintained their cookie and powerade levels despite having almost 400 more people than they expected.  Tour de Corn is on trajectory to be the best century in the mid-west.