here I am photographing the photograher at 3S3M this year. 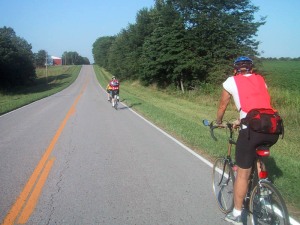 We have hundred of miles of roads just like this.

First off we got good roads.  My route on Sunday was 40 miles of painted highway and 10 miles of oil and chip backroads.  For the first 30 miles I saw 13 cars and the few that did pass me did so with plenty of room.  My 50 mile route had almost no flats, it was almost always climbing up or down, but it also avoided the bigger climbs of the area.  If you want flats we’ve got them too, you can ride hundreds of miles are rarely find a significant hill if you go North.  But if it’s challenging climbs you want its possible to make a century with more climbing then the 3 State 3 Mountain Challange if you cross the state East and West in the hills.

Besides roads we’ve got good excellent trails.  Sunday I was lamenting the fact that I can’t really ride trails in the summer.  I can, but my skin is very sensitive to poison ivy and ticks which keep me off the trail.  For those that can handle it the trails are often in excellent condition all summer long and make for epic Mountain Biking.  Recently the US Forest Service has built miles and miles of new benchcut trails.  If people knew about these trails Southern Illinois would become a destination.  We even have a 60 mile rail trail which is very popular with people who occasionally ride bikes.

So we’ve got excellent places to ride, but we also have several bike shops in the area, we’ve got an excellent mountain bike club in the Shawnee Mountain Bike Association and an equally awesome road bike club in the Continental Cycling Club of Mt. Vernon, we’ve even got a very active randonuering club.  We’ve got decent weather that’s not to cold in winter and too hot in summer.  So what’s holding us back?

Not really talking about this kind of critical mass.

Despite all these great assets we have several key things that keep Southern Illinois from being a cycling destination.  First off, critical mass, see most people are basically sheep, they see enough people doing something they think it must be good and they want to get on board.  You can nearly count the cyclists in Harrisburg on one hand.

Secondly is the socio-economic status of our population.  Cycling doesn’t have to cost a ton of money, but its a lot more expensive than jogging.  The truth is out area is depressed, opportunities are scarce and many of those with much ambition or ability get out while they’re young.  Traditional outdoor activities like hunting and fishing thrive in Southern Illinois, which is great too, but we could use more variety.

Thirdly we have no big well ran organized rides to bring people in.  There are only a few organized rides in Southern Illinois and most of them are either dead or dying.  There was an opportunity to create a big two-day event a few years ago but that got turned into a race.  Don’t get me wrong a race is great for people who race and not a bad thing for cycling in the area, but a big well organized and publicized event like the Hilly Hundred would have done alot more in the long run to promote Southern Illinois and cycling in the area.

Forthly, is back to the terrain.  I’ve spent alot of time in the Smoky Mountain National Park, and there are many places where you would be hard pressed to tell a difference between the Shawnee and the Smokys, except for one important detail: mountains.  We just don’t have the big, long mountain climbs that people, myself included, get excited about.

There are probably lots of other reasons why cycling will never be a mainstream activity in Southern Illinois but here’s an even bigger question, So What?  It seems to me that when cycling starts to get real popular in places you start to see conflict.  Battles to restrict riding, battles with motorists, battles to keep trails open and battles with other cyclists who are going to slow or too fast, listening to their ipods, cutting you off and just making a mockery of your leisure time.  Maybe its best if there are just a few of us enjoying the hidden gem of Southern Illinois.